Warning! Unfortunately your browser has disabled scripting. Please enable it in order to display this page.

Our Guide To 4K Projectors

With the development of 4K under way, the most important emerging gadgets from the 4K era include TVs, cameras and projectors.  Today we are going to focus on 4K projectors and give you a solid run down of everything that you need to know if you are thinking of investing.

As an Audio Visual company, we have noted an increase in 4K projector orders and rightly so.  We want to tell you why we love 4K projectors and why it might be worthwhile upgrading.

What is a 4K projector?

Just as the name suggests, 4K projectors are entertainment digital cinema systems that offer the ability to project either photo or video content onto any vertical or even upside down blank space.

The main difference we found between 4K projectors and conventional HD projectors is that they offer far sharper 3,840 x 2160 pixel resolutions and usually also include a whole host of beefed up visual rendering that the cheaper HD models just don’t have.

Essentially what 4K projectors give you is the ability to take regular HD TV or video content including any 4K content you have and project them onto your walls and any number of projection screens that can range from 55” diagonal width to a whopping 300” screen.

Why should I get a 4K Projector instead of a 4K TV?

Aside from the obvious differences in the design and set-up, a 4K projector and 4K TV differ mainly in price and overall quality. With a projector, you are investing in a specifically designed entertainment system which is reflected in the cost and quality of images displayed. Almost always, the cost of the projector will outweigh that of the TV, but if you rely on providing entertainment, like football in your pub or bar, it seems obvious that the 4K projector is the correct choice.

UHD projectors offer a distinctly flexible set-up that allows you to install them in much smaller spaces, something that you cannot do with a standard UHD TV. The projector can adjust its screen size to many ranges, again this is something that cannot be achieved with a TV.

What you get with a 4K projector is outstanding. Film director Christopher Nolan (Memento, The Dark Knight, Inception) suggests that 2K digital projectors are basically just HD TVs projected. Audiences can see the difference, sit close to a 2K image projected on a big screen and you will see the individual pixels, something that your audience does not want! With 4K your audience can forget about pixels and focus on every detail of the latest movie, football match etc.

4K projectors are designed with resolution and image rendering features that leave things such as a hazy visual and faded projection behind, delivering a visual clarity that is at least as good if not better than that of their 4KTV counterparts.

What’s the difference in UHD and 4K?

There is usually no practical difference as 4K and UHD are used interchangeably by most manufacturers and if you see either applied to a TV or projector then you are looking at a 4K device.

Formally the 4K specifically signifies an industry resolution standard of 4096 x 2160 pixels and more common resolutions of 3,840 x 2160 pixels. UHD is the more general term that is used to describe resolutions that are smaller than 4K but still two or three times larger than Full HD (1,920 x 1,080 pixels).

What can we watch on 4K Projectors?

The same content that you view on any 4K TV can be viewed on 4K projectors as they come with full connectivity for satellite (Sky, BT, Virgin etc.) broadband and other devices such as DVD and Blu-Ray players just like an everyday modern TV.

Though just like a 4K TV, the amount of native 4K content that is publicly available is scarce right now, however people are quickly getting used to 4K pictures and because of this TV broadcasters are already trialling 4K transmissions with companies like Netflix starting to offer streaming of programs in 4K and the BBC choosing to experimentally roll out widespread 4K broadcasting over their online channels. Hanno Basse (20th Century Fox) suggests that at some point people will just expect all of their content in 4K. “It’s going to become the new norm.” Which makes us think content will become much more available within the next few years.

But while we are waiting on a full 4K future, the projectors and TVs possess an internal up scaling engine that dramatically increased the viewing of conventional HD content on your screen.

Should you buy a 4K Projector?

If you really want the best entertainment for your customers then YES, these projectors are the best products on the market. They offer your audience a world of content, with more specialist content including sports, live concerts. By updating to a 4K projector you could boost your sales by offering the highest quality for your customers. To find out more, get in touch and we can advise you further! 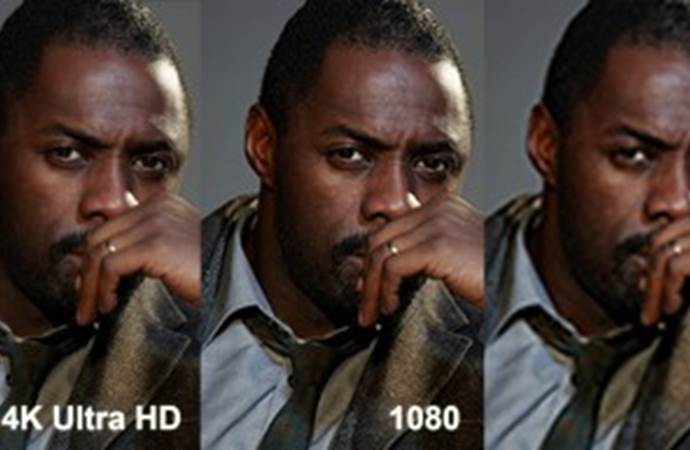